What you Need to Know About Menton, the City of Lemons on the French Riviera

What you Need to Know About Menton, the City of Lemons on the French Riviera

Close to the rocky coastlines along the Mediterranean at the French Riviera lies a small village with around 30000 inhabitants close to the Italian border called Menton. Mostly famous for their enormous lemon plantations which after harvest is the main ingredient in the liqueur Limoncello.

If you have visited Menton on the French Riviera, you know that lemons are very important for the small village and you can notice it just by strolling through the town where you can see lemon details on benches and lemon paintings on walls and light posts.

In this article, we’re learning more about the city of Menton, located on the French Riviera.

But mainly, we’re focusing on their lemon production, the thing that the city is most famous for, lemons.

But first, let’s begin with some history.

Menton is a popular vacation town, and it is also known as a town that is much calmer than other cities, such as Nice, making it popular for people who want to take it easy and relax during their vacation.

In the beginning of the 18th century, the English started to build large hotels around the core of the city.

Today, many of these hotels ahve been rebuilt into apartments.

The oldest part of Menton is the part to the right of the image above. The houses are built almost on top of each other, on a steep cliff.

Menton is a city which has most of what you need.

It has a modern part and an old part, making for a great contrast if you want to explore the city. In the modern part, it has a boulevard and lots of restaurants and shops.

Even if Limoncello is considered to be more of an Italian beverage than French, Menton has produced the drink at least as long as certain Italian Limoncello makers have. 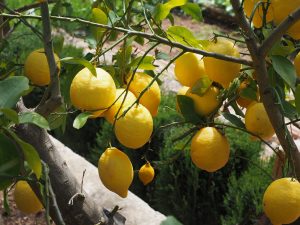 Menton belonged to Italy for some time, and therefore the previous French inhabitants learned some of the Italian traditions including the making of Limoncello. Plus, Menton is located tremendously close to the Italian border today.

Menton is also famous for its annual Lemon festival that has been celebrated since the 1930s, where around 145000 kilos of lemons are used to build different lemon statues.

This is also the reason why Menton lemon festival attracts so many tourists.

You might wonder why it is that Menton has such exquisite lemons that have a very high reputation?

According to the legends, it is said that it all started when Adam and Eve were evicted from the Garden of Eden. It is told that Eve Took a lemon on her way out and tucked it into her fig leaf pocket. As the couple wandered around searching for a new home, Adam discovered his wife’s pilfered yellow prize and was afraid that something similar to when she stole the apple would happen. He begged her to get rid of the evidence, but she held on to it until she found the perfect spot to plant it.

When she saw a place that was equally beautiful to the paradise she had lost, she lovingly planted it in the rich soil.

Thousands of years later in that very spot, some of Adam and Eves great, great grandchildren settled among the groves of lemon trees which had sprung up from Eve’s lemon and that became the town of Menton. For centuries the “Mentonians” led quiet lives, enjoying their little bit of paradise and growing and exporting their exquisite lemons.

Now to the making of Limoncello. Limoncello is made only from the lemon peel and not the lemon juice that you might think. Although some people choose to also add lemon juice to their mix, but this is not the original recipe.

The peels are then mixed with vodka to extract the juice from the peel. Sugar is later added along with water and the batch is boiled to extract the peels one last time. At last, the mixture is poured into bottles and chilled in a refrigerator. Voila! You´ve now got your homemade Limoncello liqueur, the Italian & French way.

How to make Limoncello

Thank you for reading this weeks article and we hope you will come back another time to continue reading about everything there is to know about the French Riviera – article by article.

Au revoir, for this time, as the French say.