Cannes, the gorgeous city situated along the French Riviera has, just like its neighboring cities along the Cote d’Azur a Mediterranean climate, which means which means warm summers and mild winters, with little rainfall, making it a pleasant place to be, all year around.

Cannes offers many sun hours during the summer months, and quite a number during autumn and winter as well.

In fact, the weather in Cannes brings us a generous number of 12 hours of sunshine during the summer months.

The best part is that Cannes remains sunny for the most part during winter, too.

This makes Cannes a popular city for tourists all year round – during winter nonetheless, to escape from colder and darker climate in the more northern parts of Europe.

The weather in Cannes is so pleasant that it makes Cannes in the top 63 percent of tourist destinations for pleasant weather.

It is during spring that Cannes really start to come to life. During spring, you can expect comfortable weather during the day and plenty of sun. People going out to cafés and restaurants to enjoy a lunch or drink in the sun is a common sight.

The evenings and nights are quite chilly during the spring, but as summer is closing in, temperatures will quickly rise – during the day, as well as during the night.

When we’re closing in on May, Cannes offers incredible weather that you’ll fall in love with. In May, you can expect temperatures in the low 20s during the day, but if you’re enjoying a drink in the sun, the temperature will feel much higher. During May, you won’t be needing any jackets or thick sweaters. During the day, you’ll manage just fine with a regular shirt. And if the sun is gazing, you might want to wear a t-shirt.

During spring, rain is not very common, but not unlikely either. In fact, rain can be quite unpredictable during spring, but at the same time, the rain often stops quite quickly, and the sun peeks out from the clouds again.

If you dislike the crowds, the best time is to come here before the first of July and 5th of September, as this is when the French and other European counties have their holiday. And going there before the crowds is definitely not a mistake. At the end of June and in the beginning of September, the weather in Cannes is warm and very pleasant.

Weather in Cannes during Summer

During summer, the weather in Cannes is tremendously pleasant and warm.

You can expect temperatures averaging in the mid-20s, but the temperature can move between high 20s and low 30s as well. If you’re out in the open and the sun is shining, it will feel a lot warmer. Especially since the air in Cannes is quite humid.

The weather in Cannes makes for incredible beach days with long hours of sun and high temperatures in the water, which is also the reason to why the beaches are packed during the summer months.

Nights are extremely pleasant during the night in Cannes. The nights in Cannes average around 17 degrees, which means there won’t be any need for thick shirts or jackets.

In fact, in Cannes during the evening and Night, you’ll see a lot of people wearing just t-shirts and shorts.

When talking about the weather in Cannes, the time to visit if you’re after the warmest temperatures are June, July, and August, with August having favorable water temperature after being warmed up during the whole summer. The absolute warmest time is normally July. At that time, the average temperature is around 30 degrees, and it can stretch up to mid-30s.

Weather in Cannes during Autumn

Autumn is a very popular time to be in Cannes because of the weather.

In August, the town is packed with people, but as August comes to an end, and as September begins, the people who have been spending their summer vacations in Cannes start to return home, and inhabitants of Cannes are starting to return to their jobs.

As people are leaving, Cannes start to feel much less like a tourist town, and now, you can really embrace the authenticity of Cannes, and enjoy a more calm city, while still enjoying the tremendously pleasant weather.

Temperatures of the mid-20s in September and 20 degrees in October makes the autumn perfect for doing more exploring of the town without having to drink so much and seeking protection in the shadow every now and then. September and October are perfect months for sunbathing, and you’ll be able to see lots of people bathing in the water – even if the water temperature is slowly decreasing.

Weather in Cannes during the Winter

During the winter, you’ll mostly see the local inhabitants, but as Cannes is a lively city with events going on regularly, you will definitely not be alone as a tourist or visitor from abroad.

When the sun shows up during winter, which it often does, the weather in Cannes is very pleasant, but a jacket or sweatshirt is to recommend. During winter, you can still see people sitting outside the cafés, but it’s far from as crowded as it is during spring and summer.¨

The weather in Cannes during the winder is very mild, and the average temperature is around 12-14 degrees. During the night, it is quite chilly.

What’s the best time to go to Cannes in France?

Well, it all depends on your preferences.

If you dislike the crowds, the best time is to go before the European summer holidays start.

However, if you’re after the warmest weather in Cannes, July and Augst are safe bets, as the months offer warm weather, many hours of sun, and few (if any) days of rain).

If you’re going to Cannes for the weather, the most pleasant months are considered to be June, July, August, September, and October. 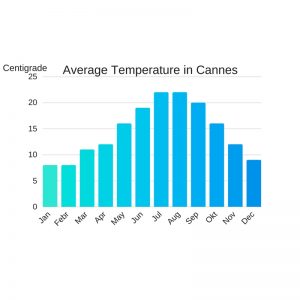 Cannes is located near a large body of water (e.g., ocean, sea, or large lake). This section reports on the wide-area average surface temperature of that water.

The average water temperature experiences some seasonal variation over the course of the year.

Cannes has a ton of days of sun.

In fact, Nice, that’s less than one hour away from Cannes has 2668 hours of sunshine per year.

Canes, which is known for its warm and very pleasant climate is known to have around three thousand sun hours a year.

The shortest day of Sun in Cannes is December 21, having 8 hours, 56 minutes of daylight.

On the contrary, the longest day in Cannes is June 21, having a whopping 15 hours, 26 minutes of daylight.

The latest sunrise in Cannes is at 8:05 AM which is on January 2.

The earliest the sun sets in Cannes is on December 9, when it sets at 4:55 PM.

When it comes to clouds, Cannes is most clear from clouds from around June 16 until September 13.

The clearest day of the year is July 21st is only “mostly cloudy”18% of the time.

Cannes is the most cloudy between September 13 and June 16. 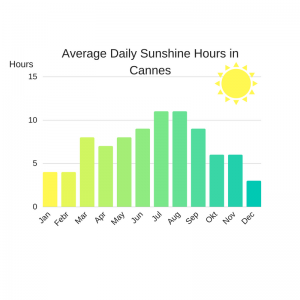 Compared to many other places in Europe, especially the northern parts, Cannes have tremendously few days of rain

As the graph shows, the time where it rains the very least is when it is the most popular to visit Cannes.

The winter and spring months see a similar amount of rain, averaging below 40 mm through the months January to May.

The time when it rains the most is Oktober, November, and December.

And even then, it doesn’t rain a lot compared to other European countries.

At the same time, July is the driest month in Cannes. 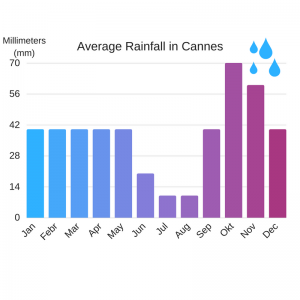 July is the driest month in Cannes, with an average of 2 rain days. Followed closely behind is August, which has an average of 3 days of rain. 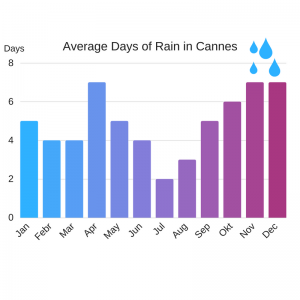 The most Humid period of time in Cannes is the period from June 12 to September 22.The muggiest day of the year in Cannes is August 6th, which has muggy conditions 48% of the time.

On the contrary, the least muggy day of the year is the third of March 3, where mugginess is essentially no-existant.

Another factor that affects how the weather is perceived in Cannes is the wind.

The period when it is the windiest in Cannes is during the period October 5 to April 30, when winds are averaging of more than 8.0 miles per hour.

The windiest day of the whole year in Cannes November 25th, which has an average hourly wind speed of 9.4 miles per hour.

Remember that winds vary significantly locally, and on places like Rue Dándtibes which is protected by high buildings, it might not be any wind at all, while on places like the Croisette, it might be very high wind.

The period of time when the winds are most calm is the period between April 30 and October 5.

The calmest day of the year in Cannes, in terms of wind, is August 9, which has an average hourly wind speed of 6.6 miles per hour.