Cannes or Nice on the French Riviera: Which City is Best?

Are you wondering if Cannes or Nice is best?

A common question that is being asked is ”Cannes or Nice – which is the best?”, and when it comes to comparing different cities, it’s always a bit tricky, because every city is unique in their own way, and what some might consider being the best might not be considered the best according to someone else.

Mostly, when comparing cities, including when trying to decide Cannes or Nice, it’s about preferences.

So that’s why we won’t share too many personal options in this post but instead focus on answering the question ”Cannes or Nice?”, by presenting their positive and less positive sides, so you can form an opinion and answer the question yourself.

Of course, before you’ve actually been to Cannes and Nice, it’s impossible to compare them and decide if the best is Cannes or Nice, however, you can compare them based on what types of cities they are and what they have to offer.

Let’s begin by saying, whether you choose Cannes or Nice to stay at, it won’t matter that much, because traveling between the two cities can be done with ease. However, the tricky part comes if you won’t have time to explore both. But the best part is that traveling by train between them only takes about an hour.

This means that if you decide to stay in Nice, but then don’t find it too interesting, you can travel to Cannes, and vice versa.

If you go out and ask people ”Cannes or Nice?”, you’ll get very split opinions. But sometimes, you can see that more people are responding Nice, but that isn’t very surprising since Nice is a larger city, which means more people have stayed there, and even live there, and so, people tend to resonate with places they have been at, even though they are comparing with a city they’ve never been to.

Then, of course, it will depend on people’s own individual experiences.

It might have poured down rain when one person was visiting Cannes or Nice, and if so, their memory maybe isn’t that positive.

The list of benefits and less positive sides never ends, and when it comes down to choosing, it will all come down to what you prefer.

Some complain that Nice is too much of a large city that is too noisy, but on the contrary, others will say that Cannes is too calm.

One of the most debated topics when contemplating Cannes or Nice are the beaches on respective places.

It’s no news that Nice has a large pebble beach (or more correctly large rocks) that stretches many kilometers, and the beach of Cannes is pure sand. 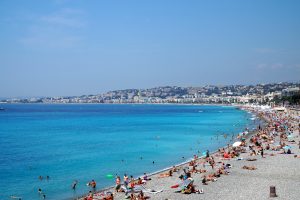 For the beach lovers who enjoy spending lots of time on the beach, and most importantly, don’t want to lie on a surface made up of cobblestone, this is an important question when choosing between Cannes or Nice.

Some think that Cannes has a more beach resort feel than Nice, and whether that is true in reality will depend on you your perception, and what you define as a beach resort.

Some argue that Nice is the ”real” city, whereas Cannes is a resort city.

While the beach in Nice consists of pebbles, it is possible to rent a chair at a beach club which will make your day on the beach in Nice more pleasant, however, that’s going to cost you around 20 to 25 euros per person. And while Cannes is (a lot) sandier than Nice, the majority of the beach in Cannes is private, and during summer, the two only public plages will get crowded. This means that in order to take part of the sandy beaches in Cannes for free, your best bet is to come early. Otherwise, if you’re willing to pay, you can always rent a chair. 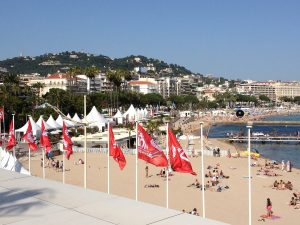 If you aren’t that picky, you’ll manage just fine to bring a towel and lie on in Nice.

In fact, some people even prefer the pebbles over sand -but everyone has their preferences

Nice is considered to have a better old town than Cannes, and that’s not very surprising considering the fact that Nice is a large city, and Cannes is much smaller. 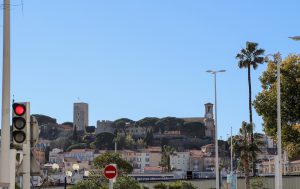 The old town of Nice is a popular place both in the day and the evening, making a place for a large market during the day, and attracts many people for dining in the evening.

Cannes is the city that is known to be the luxurious and glamorous city of the two, but the fact is that it has actually been found that overall, the cost of staying at a hotel per night is higher in Nice, but it is also important to focus on what this result means.

While Nice, in general, for example, costs more to stay at, Nice has a large selection of cheap and expensive hotels/hostels, so you can find a place to stay that match your budget

Both Cannes and Nice has several five-star hotels, but both of them have cheaper alternatives too. In other words, in terms of finding hotels and a place to stay at, the price won’t differ too much between the two cities. 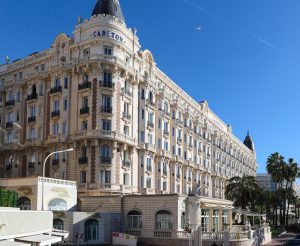 There really is something for everyone when it comes to hotels and living.

Cannes or Nice as a base?

Having a base on the French Riviera over the time you are here means that you want to live so that you have easy access to all the amenities, such as transportation systems, where the train is most common for traveling along the Riviera.

The train station of Cannes, Gare De Cannes,  is situated in the center of town.

The train station in Nice is often quite easy-accessible.

Naturally, more people choose to have Nice as their base, and an important reason is that most foreign tourists travel by plane, and since the airport is situated in Nice, it is easily accessible when it’s time to go home, compared to Cannes.

At the same time, traveling by train to the airport from Cannes will only take you about an hour (normally less), and taking a taxi will take you about 40 minutes if there’s not a lot of traffic.

If you look at the map, Nice is also located more in the middle of the French Riviera, and since it is, more people choose Nice as their base since they can then explore places in both directions. But, again, traveling from Cannes to Nice doesn’t take very long. In fact, if you want, you can take the helicopter from Cannes, and that will go very quickly.

When choosing Cannes or Nice as bases, you need to think about what it is you want to do.

If you want to explore more cities that are located to the east, Nice might be a better option, however, if you, at the same time want to live in a city with great and comfortable beaches, Nice might not be ideal.

Cannes or Nice, in general?

It’s easy to draw the conclusion that both cities are beautiful, just like all the other cities on the French Riviera.

Cannes is mostly known for its stunning Croisette, its idyllic beaches, and wonderful oceanfront restaurants, but Nice, on the other hand, is more known for its enormously long Promenade des Anglais, stone beach, wonderful, picturesque old town, and a richer history.

If you prefer a calmer place to stay in, then Cannes is the place to stay at. There, you can sit at a café along the Croisette, or take a chair and enjoy the beautiful views over the Mediterranean.

In Nice, there are 8 files of traffic in total on some places along the Promenade des angles, which means that the traffic can sometimes be disturbing. But Nice is perfect if you want a more lively city with more people around you and more things going on.

It is not a secret that Cannes is smaller and have fewer inhabitants than Nice, and so, it doesn’t come as a surprise that there will be fewer things to do.

Since Nice is larger and has more inhabitants, there are more things to see and do in Nice but if you’re only visiting a few days, it will be impossible to do them all, either way. Whether you’re in Cannes or Nice.

Nice has more of a nightlife than Cannes, but both Cannes and Nice has nightclubs and bars where you can hang out.

If you come to the French Riviera to soak in the sun and just lie on the beach all day, Cannes is probably the better choice. Moreover, if you just want to stroll around, go shopping, sit at cafés, etc., then Cannes is the city to choose.

However, if you want to go on sightseeing tours, visit museums, look at monuments, etc., then Nice is an obvious choice. Since Nice is larger, naturally it will have more museums and similar as well.

The good news is that Cannes is also close to a number of cities and towns which are well worth exploring.

Firstly, Cannes is just minutes away from the L’erins islands which consist of 4 islands, one of which is inhabited by monks.

Moreover, Cannes is also close to Antibes, Juan-Les-Pins, and in Antibes, for example, you can find things like the Picasso museum.

View On AirbnbNew Apt 2 min from Beaches and Croisette Cannes !